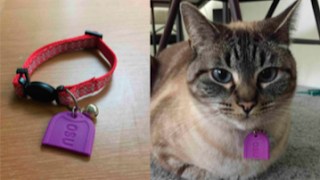 Dr. Peterson was involved in a recent study which linked the use of flame retardants and other common household compounds to hyperthyroidism in cats.
This study, published in Environmental Science & Technology, used silicone pet tags to monitor feline exposure to various chemicals and compounds found throughout the home. These silicone tags were attached to a standard cat collar (see photo above), and most owners reported that wearing the silicone tags didn't bother their cat at all.
The concern, in general, is that cats are being exposed to OPEs inside the home. OPEs (organophosphate esters) are one type of flame retardant, a chemical alternative to PDBEs. PDBEs began appearing as flame retardants in the 1970s and have been associated with hyperthyroidism in cats in a number of studies, as well as being harmful to humans. PDBEs were phased out beginning in 2004, and OPEs were substituted by manufacturers as an alternative flame retardant.
This study is the first time we've taken a hard look at OPEs and how they affect cats. 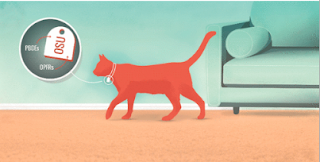 From one of the press releases: "In the mid-1970s, manufacturers began to put polybrominated diphenyl ethers (PBDEs) into textiles, polyurethane foam, plastics, and electronics. But in 2004, U.S. manufacturers started voluntarily phasing out these flame retardants amidst environmental and health concerns. Alternatives including organophosphate esters (OPEs), such as tris(1,3-dichloroisopropyl) phosphate (TDCIPP), were added instead, but recent research suggests these flame retardants, like PBDEs, can act as endocrine disruptors. Prior research suggested a link between PBDE levels and feline hyperthyroidism, but so far OPEs have not been examined in this context."
A direct quote from this study: "To our knowledge, this is the first study to investigate bioavailable household OPE exposures between hyperthyroid and non-hyperthyroid cats."
Conclusion: Higher concentrations of harmful compounds were found on the tags of cats in homes with air fresher use (versus no air freshener use), as well as modern residences build after 2005 (versus pre-1989), and on the tags of cats who spend more time on upholstered furniture.
More directly, harmful compounds were found in higher concentration on the tags of hyperthyroid cats, versus on the tags of non-hyperthyroid cats, indicating a higher level of exposure to the compounds (such as OPEs) in the environments of the cats who have become hyperthyroid.