How to Feed Cats with Diabetes 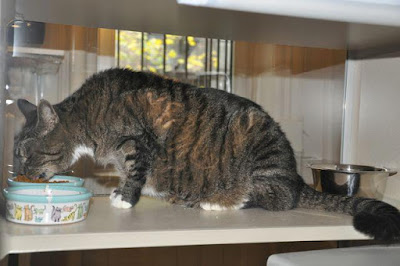 Diet plays a key role in the successful management of the diabetic cat. Because cats are obligate carnivores (1-3), diabetic cats are relatively carbohydrate intolerant and respond best to a low carbohydrate diet. This differs from dogs, which are omnivores and are quite tolerant of a moderate to high carbohydrate meal, even when diabetic (4,5).

Evolutionary events shaped the cat’s core metabolism such that their systems are uniquely set up to metabolize a diet which is high in moisture, high in protein, and very low in carbohydrates. Because this is the diet they have relied upon for tens of thousands of years, they do not have the ability to process carbohydrates very efficiently and show relative carbohydrate intolerance (1-3). This becomes extremely important when selecting a diet for cats with diabetes.

Postprandial Glycemia in Man, Dogs, and Cats
As a result of these differences, plasma glucose clearance rates are longer in cats compared to dogs or humans after feeding a moderate to high carbohydrate meal — in other words, even normal cats have much more prolonged postprandial period of hyperglycemia than might be expected. In healthy humans and dogs, postprandial hyperglycemia normally persists for 2 to 6 hours (4,6).

In contrast, recent studies of healthy cats found that both serum glucose and insulin concentrations remained significantly increased for a median time of 12 hours following ingestion of a moderate carbohydrate meal (25% of calories), and that both glucose and insulin concentrations remained above baseline values for 24 hours in approximately 20% of the cats (7,8). Most feline diets contain even higher amounts of carbohydrate (greater than 25%) and, therefore, would be expected to result in more severe postprandial hyperglycemia and a longer time to return to baseline.

Management Goals of Feline Diabetes
In cats with diabetes, a primary goal of therapy is to feed a diet that will lessen postprandial hyperglycemia, reduce marked fluctuations of blood glucose concentrations, minimize the demand on beta cells to produce insulin, and improve insulin sensitivity (9-11). By doing this, we decrease the effect of “glucose toxicity” and hopefully allow the pancreatic islet cell to partially recover. In about half of newly diagnosed diabetic cats, this will lead to remission of the diabetic state (12-14).

A secondary goal of therapy is to provide a diet that will help normalize body weight and maintain and/or restore lost muscle mass (15,16). I'll be covering the reason why higher protein diets are also important for diabetes in my post next week. 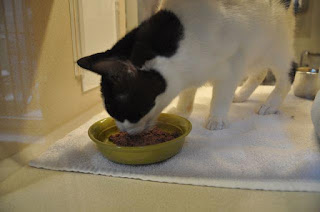 Recommendations for Diabetic Cats: Low Dietary Carbohydrates:
It is well accepted dogma, at least by most practicing veterinarians who specialize in feline medicine, that feeding a low-carbohydrate diet is the mainstay in the treatment of diabetes mellitus, especially if remission of the diabetic state is the goal. In accord with that, there is strong clinical and research evidence that a diet containing very low concentrations of carbohydrate (e.g., carbohydrates less than 12% of calories) is the most effective means for achieving our nutritional goals for cats with diabetes (5,9,17-19).

Feeding a low carbohydrate diet will improve insulin sensitivity, help stabilize glucose metabolism, and can reduce or eliminate the need for exogenous insulin in these cats (5,20,13,14).  The likely mechanism for these observations is relatively simple —decreasing dietary carbohydrate load reduces the postprandial blood glucose elevation, which in cats is prolonged, sometimes lasting for over 12 hours (7,8).

In some diabetic cats, decreasing carbohydrate content to a level significantly less than 12% of the daily calories may help increase their rate of remission. In accord with that, the highest remission rates (greater than 80%) have been reported feeding diets with approximately 6% of energy from carbohydrate (21).

If a change in feeding to a low-carbohydrate diet is made in a diabetic cat already stabilized on insulin, it is extremely important to realize that this will result in a lowered daily insulin dosage — often significantly (9.20). If not closely monitored—ideally with home glucose testing— severe hypoglycemia can develop in these cats because they become more sensitive to insulin after the diet composition is changed.

beautiful post! thank you. Although I am saddened that you did not add in anything about home testing of glucose levels. Blindly reducing insulin given when changing a diet still puts the pet at risk. A simple blood test will give the owner so much knowledge, and knowledge is power..

Thank you for your kind comment. Obviously, one would check the blood glucose after a change (decrease) of the insulin dose. However, that was not the purpose of this post, and glucose monitoring deserves its own discussion.