Diagnosing Canine Cushing's Disease: Should the ACTH Stimulation Test Ever Be Used?

How does this test work? What are we really evaluating with the ACTH stimulation test?

First of all, the basis for this test is that dogs with pituitary-dependent hyperadrenocorticism (PDH) or functional, cortisol-secreting adrenal tumors (FAT), because of their increased adrenocortical mass or volume, have the capacity to secrete excessive amounts of cortisol.

This is an indirect test that gauges the degree of adrenocortical thickness. Unlike the low-dose dexamethasone suppression test, the ACTH stimulation test doesn’t look at the entire hypothalamic-pituitary-adrenal (HPA) axis or the effect of glucocorticoid-negative feedback on the HPA axis. 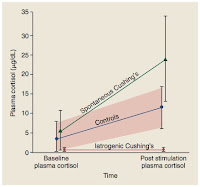 In normal dogs, administration of ACTH produces a rise in serum cortisol to values usually >10 μg/dl (>300 nmol/L). In contrast, dogs with Cushing’s syndrome (because of the increased thickness of the adrenal cortex) tend to have an exaggerated cortisol response to ACTH administration, with post-ACTH serum cortisol rising to concentrations >20 μg/dl (>600 nmol/L). Dogs with iatrogenic Cushing's have a blunted cortisol response to ACTH (see figure).

But what’s the percentage of dogs with Cushing’s disease that are actually diagnosed with this test? What’s the test sensitivity?

About half of dogs with cortisol-secreting adrenocortical tumors and about 80% of dogs with pituitary-dependent hyperadrenocorticism (PDH) show an exaggerated cortisol response to the ACTH stimulation test.

In clinical practice and reality, however, the sensitivity is actually worse than those statistics reveal. Although it is clear that over 20% of dogs with Cushing's syndrome have post-ACTH cortisol test results within the reference range (< 20 μg/dl for my laboratory), an additional 20-30% of dogs with Cushing's have test results described as "borderline" (serum cortisol concentrations >16 μg/dl but <24 μg/dl).

In effect, that means that only 50-60% of dogs with Cushing's disease will have serum cortisol responses that are clearly abnormal (> 25 μg/dl). In other word, this test is a poorly sensitive diagnostic test for Cushing’s syndrome. In most dogs, it would be more cost effective to turn to another test, such as the low-dose dexamethasone suppression test, as the first-line screening test.

Other disadvantages to using the ACTH stimulation test:

Yes, there are definitely 3 situations in which ACTH stimulation testing would be indicated as a diagnostic or monitoring test for adrenal disease in dogs. The major indications for using the ACTH stimulation include the following: 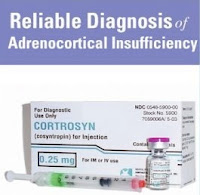 In general, there is a general rule for endocrine disease that is useful to remember when approaching endocrine hyperfunction vs. hypofunction:


In almost all cases, it is better to use stimulation tests to diagnose endocrine hypofunction, whereas suppression tests are best used for endocrine hyperfunction.
So with the ACTH stimulation, the 3 situations (listed above) where this test really has advantages over the other screening tests all include situations where the adrenal glands have been suppressed (iatrogenic steroid use, trilostane, mitotane) or destroyed (Addision’s disease)!

is there any benefit to using the combined LDDST-ACTH stim test?

The combined dexamethasone suppression test- ACTH stim test generally uses a HIGH dose of dexamethasone, not a low dose. I see no advantage in using that combined test, and do not recommend it.

Let's say you first do a classical 8-hour low-dose dexamethasone suppression test. Then at 8 hours, you inject Cortrosyn and do a 1-hour ACTH stimulation test, I don't have a problem doing that combination. But have you really gained that much? And it really becomes a long day!

It is my understanding that when diagnosing a diabetic dog suspected of having HAC, the ACTH stim test is preferred because it is less sensitive and therefore less susceptible to false postives. Is this true? If so, can you please explain why and if not, then what is the best test to do under this circumstance especially if controlling the diabetes before hand is not an option? Thank you

Both dogs with Cushing's and diabetes will show signs of PU/PD, have hepatomegaly, and have high serum alkaline phosphatase activity. So we have to start looking at other signs, generally those of the skin or hair-coat, to really know if hyperadrenocorticism is also contributing to the signs seen in your dog with diabetes.

Hello..our poodle is between 15/16 kg and it has been requested that he had 60mg of vetoryl .Yet I have read that the Dechra web site which suggests a lower dose .Please could you advise

I generally start with a dose of 2 mg/kg per day, so I'd start with 30 mg per day in your dog. That said, some dogs will need a much higher dose.

What if a dog had the LDDST that came back negative but he has the classic symptoms for Cushing's? Is this a test that should be used then or is something else better?

Then an ACTH stimulation test or determination of urinary cortisol"creatine ratio should be used. In some dogs, repeating the LDDST in 1-3 months will be diagnostic.

We have a diagnostic conundrum which the ACTH stim may solve, but are confused about protocol. The case is a long term atopic dog (8 yo castrated male Maltese) treated every other day with oral prednisone for "years", now showing clinical signs of hyperadrenocorticism such as calcinosis cutis, pot belly, alopecia etc. Can we do the ACTH stim while the dog is using prednisone; we are worried the drug will measure as "cortisol" in the test leading to equivocal results. Or, do we withdraw prednisone over a week or so (risk of Addisonian crisis?) then test?

Very good question. First of all, what dose of prednisone (mg/kg body weight) is the dog getting on the alternate days? Most dogs do not develop iatrogenic Cushing's unless this dose is quite high.

In any case, the half life of pred is not that long in the bloodstream. I would go ahead and do the ACTH stimulation test on the day the dog does NOT get any prednisone (no drug for at least 24 hours). That should be long enough to get reliable endogenous cortisol measurement.

So, if both the pre- and post-cortisol values turn out to be low, that would certainly be consistent with iatrogenic hypoadrenocorticism (as well as signs of iatrogenic Cushing's).

If the post-ACTH stimulated cortisol is high, then the dog likely has spontaneous Cushing's syndrome. This would not be unexpected in a Maltese!

I have a 12 1/2 year old cairn terrier who has abnormal liver function tests and who my vet is convinced he has cushings based on clinical signs. He is becoming more lethargic. He has had several ACTH tests but have all come back negative. My vet now wants to use a low dose dexamethasone supression tests after discussion with the laboratory, would you suggest this? Would it be worth me considering referral to someone like yourself?

If you aren't happy, talk to your vet about a referral to an internal medicine specialist.

Hello,
My dog is 7 years old westie. He has skin problems since his 3rd year. We treated him with "triderm" all the time, almost every evening for periods of month and more. He was licking it a lot. 3 months ago he started to act strange as hiding from us and not being active as usual. Ultrasound showed bigger liver and bigger right adrenal gland. Vet used low dose dex test. He waited 2 weeks after the last treatment with triderm. The results from the test are positive for PDH - baseline 36 nmol/L, 4 hour <14nmol/L, 8 hour 44 nmol/L. The reference is above 41.4 nmol/L. Still the dog hasn't any typical signs for Cushing's syndrome, except the skin problem, that is spreading really bad now as we stopped treating it. We haven't started any medication. Do you think we have to repeat the test?

I certainly wouldn't make any definitive diagnosis based on what you have told me. I'd continue to monitor and maybe repeat the tests in 3-6 months. Talk to your vet.

I certainly wouldn't make any definitive diagnosis based on what you have told me. I'd continue to monitor and maybe repeat the tests in 3-6 months. Talk to your vet.

is there a time limitation/waiting period for performing an ACTH-stim test after a previously performed LDDS test (i.e. could the one dose of dexamethasone administered suppress the adrenal axis enough to cause a falsely low increase in cortisol on my stimulation)?

Theoretically, you are correct. The baseline cortisol certain could be suppressed but the post-ACTH stimulated cortisol shouldn't be affected.

I'd try to wait a week between a LDDST and ACTH stimulation test, if possible

I did an ACTH stim (0-1 hours)followed by a LDDST (2-9 hours) the same day for a patient in sequence that is coming from 6 hours away. Would I have to interpret the results separately.

You can't do an ACTH stimulation followed by a LDDST on the same day. The ACTH stim test are okay but the LDDST don't mean anything if they aren't suppressed. The ACTH may continue to stimulate some cortisol for along time.

I have an 11yo, MN, crossbreed who has had urinary incontinence for the last 8 months (dribbling urine when lying down and when excited). He has a caudally displaced bladder based on abdominal radiography but I was concerned that this was not the only problem given the late age of onset (no previous urinary tract signs but could it just have been exacerbated by age related muscle weakness?). Blood tests reveal persistent and marked elevations in ALP over the last six months and I was concerned about Cushings disease as a predisposing factor but the owner reports no increase in thirst. LDDST is consistent with pituitary dependent hyperadrenocortism and there is mild to moderate vaculolar hepatopathy on cytology of hepatic FNAs. However, ACTH stimulation testing suggested normal adrenal function. Since the owner reports no polydipsia (and they have measured 24-hour water intake) I am unsure whether this is a false positive LDDST result or a false negative ACTH stimulation test result. The adrenal glands are both top end of normal range on US measurement. What would be your interpretation?

Dogs with Cushing's can develop overflow urinary incontinence, but then they have severe polyuria. This doesn't seem to be the case here. I'd focus of the owner's complaint now and do followup testing for possible Cushing's in a few weeks/months.

The PU/PD, high ALP, and high cholesterol had/has me considering Cushing's too (her specific gravity is consistently low too) so I performed a LDDST on her. Her results are the following:

With these equivocal results, I am wondering if I should consider an ACTH stim??

Thank you for your time!
-Gabe

Yes, I would do an ACTH stim test or measure a urinary cortisol:creatinine ratio, or both.

Thank you very much!