What's the Best Insulin for Diabetic Cats and Dogs? 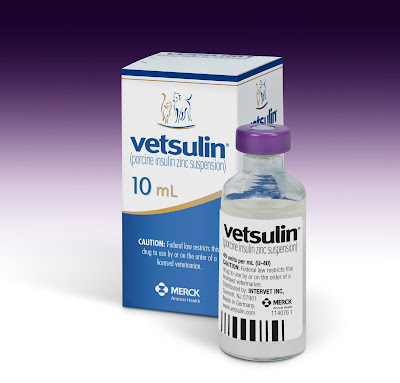 With the reintroduction of Vetsulin (porcine insulin zinc suspension) to the U.S. market (1-3), I've received a number of questions concerning the use of this insulin in dogs and cats. Here are the major questions I've received:
Is this the initial insulin of choice for dogs?
In my opinion, the answer to that is yes, this is the initial insulin of choice for most dogs. Because it's composed of both short and long-acting insulin components, Vetsulin helps control postprandial hyperglycemia and has a longer duration of action than NPH in most dogs (4-7). The cost is approximately the same as NPH, but less than the insulin analogues (e.g., detemir and glargine). See more below, where I do my cost-comparisons for the various insulin preparations.

Is this the initial insulin of choice for cats?
A number of studies have proven that Vetsulin will certainly control hyperglycemia in cats, especially if combined with a low carbohydrate diet (<10% of calories) (8-11). However, the duration of action may be too short in some diabetic cats, and most feel that the longer acting insulin preparations (glargine, detemir or ProZinc) work better to maintain better control of hyperglycemia in cats (11-13).

Of course, maintaining glycemic control throughout the day is more important if diabetic remission is the goal (13,15,16)— if not, Vetsulin might be less expensive and certainly would be more than adequate in most cats (8-10).

If we have a dog or cat that isn't responding well to the current insulin, should they be switched to Vetsulin?
For diabetic dogs not regulated on NPH, the answer is a definite "yes." For cats that are on NPH, Vetsulin would certainly be a better choice, but switching to one of the  longer-acting insulin preparations (insulin glargine, detemir, or PZI) would be a better choice.

How will this insulin compare to NPH, detemir, glargine, or PZI in cats or dogs?
In dogs, I generally use 3 insulin preparations: Vetsulin, NPH, and insulin detemir. Again, the main problem with NPH insulin in dogs is that the duration of action is too short, and many of these dogs will respond better to Vetsulin. Insulin detemir is the most potent insulin we have for use in dogs, with a longer duration of action (14), but it's much more expensive than either NPH or Vetsulin.

In cats, I never use NPH because of it's short duration, but I will sometimes use Vetsulin as an intermediate-acting insulin.  Most authorities would rank insulin glargine as the first choice of insulin in cats, then insulin detemir or PZI (not the compounded product (17), but FDA-approved ProZinc), then Vetsulin, then finally NPH as a very last choice.

How does the cost of Vetsulin compare to these other insulin preparations?
NPH insulin, insulin glargine, and insulin detemir are all available as 10-mL vials at a U-100 insulin concentration. The retail prices of an individual vial of NPH insulin, insulin glargine, and insulin detemir vary, depending on the pharmacy and its location. I checked out the prices today at my local Walmart, CVS, and Rite Aid pharmacies, and here are the range of prices I was quoted:
Vetsulin (porcine insulin zinc suspension) is available as a 10-mL vial of insulin in a U-40 insulin concentration. The wholesale cost of the updated Vetsulin product is inexpensive ($23.97 per vial), similar to the original product. In most veterinary practices, the retail price of a vial of Vetsulin will be approximately $50.

Therefore, the cost of a bottle of Vetsulin is similar or even less than the price of NPH insulin and costs much less (about 25-30%) than that of insulin glargine or detemir.  But remember, the total amount of insulin in a vial of NPH, glargine, and detemir (all U-100 insulins) is 1000 units, where a vial of Vetsulin (a U-40 insulin) contains 400 units, only 40% as much. So in the end, the cost per unit of most of these insulins preparations woud generally turn out to be similar.

Therefore, the cost of all of these insulin preparations would be similar in most diabetic cats and smaller dogs receiving a typical daily dose of insulin (0.5-0.7 U/kg). Because the concentration of Vetsulin is 40 U/mL, owners of larger diabetic dogs, owner will often go through a bottle within a few days. In these dogs, if insulin resistance is present, it's sometimes cheaper to use a U-100 insulin, such as detemir.

However, the bottom line is clear: it doesn't matter how much money we are saving if the insulin isn't working. Instead, for most pet owners, it's more important use an insulin preparation that best controls the diabetic state. And for most diabetic dogs, that insulin would be Vetsulin, followed by insulin detemir.

I purchased Lantus (Glargine) for my cat on August 19, 2015 (upon first diagnosis). It was $300.00 (!) per bottle at Wal-Mart, and even more at other pharmacies that I called. We are feeding him Science Diet Prescription M/D and would like to see him go into remission, though we realize that this may never happen. The price of prescription drugs has become outrageous. Is there any recent information on how to deal with a diabetic cat without going bankrupt ?

So switch to Vetsulin.. much cheaper.