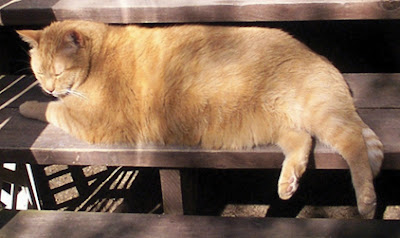 He recently presented for an inflamed, swollen prepuce, along with a moist dermatitis. The rest of his physical was not remarkable, except that he had lost about a pound of weight since his last visit about 6 months ago. The owner reported his overall activity and health had been fine. I clipped and cleaned the area, gave him an injection of dexamethasone (2 mg, IM) and had the owner treat the area topically with Panalog ointment.

Over the last 2 weeks, the owner now reports an increase in thirst and urination, as well as continued weight loss.  I'm rechecking Timmy tomorrow and planning to do a complete serum chemistry panel and urinalysis. I am very concerned that I have created a diabetic, but it seems unlikely to me that that small amount of dexamethasone could have induced diabetes mellitus.

Do you think glucocorticoid-induced diabetes is possible in this cat?

Glucocorticoids, such as dexamethasone, are one of the most commonly prescribed classes of drugs in veterinary medicine, but they carry the risk of significant side effects. In comparison with other species, cats are considered relatively resistant to many of the deleterious effects of glucocorticoids, and some investigators have reported that cats require higher doses of glucocorticoids than dogs to achieve equivalent effects (3). This glucocorticoid resistance may be related, at least in part, to the lower number of glucocorticoid receptors that have been documented in the skin and liver of cats (4).

Nonetheless, side effects associated with treatment with glucocorticoids can certainly develop in cats, and can include induction of insulin resistance, glucose intolerance, and overt diabetes mellitus (5). In susceptible cats, giving glucocorticoids — even a single dose— can unmask or exacerbate a preexisting diabetic state. In this regard, the glucocorticoid administered appears to be important. In one study, dexamethasone showed a greater diabetogenic effect in cats than did an equipotent dose of prednisolone, a short-acting glucocorticoid (6).

If diabetes mellitus is confirmed in this cat, you might have a chance of "reversing" Timmy's diabetes. To do that, however, you should definitely not administer any additional glucocorticoids. In addition, we should start feeding a low-carbohydrate canned diet (less than 5-10 of daily calories), and began treatment with a long-acting insulin preparation (eg, ProZinc or insulin glargine) given twice daily.

By controlling postprandial hyperglycemia and lowering the cat's circulating blood glucose to close to normal throughout the day, this may help revert the effects of glucose toxicity on the insulin-secreting pancreatic cells and remission of the diabetic state may occur (1,7).

Follow-up Report
Well, Timmy's workup has definitely confirmed that he has nonketotic diabetes mellitus. His serum glucose concentration was 539 mg/dl (normal < 150 mg/dl) with 3+ glucosuria.  Fortunately, he was negative for urine ketone concentrations. Timmy was started on ProZinc insulin (2 units, BID) and his food changed from a dry maintenance diet to canned Purina DM diet. He definitely is starting to feel better, with less polydipsia and polyuria (PU/PD), although he has taken a while to regulate.

My Response
I agree with your hypothesis. I hope the diabetic regulation goes smoothly now that you have started a low-carbohydrate, high-protein diet. In addition, now that the effects of the glucocorticoids are wearing off, it's possible that this cat could experience remission of his overt diabetic state and be able to go off insulin treatment.

That said, he still needs to loose a great deal of body weight, both for his diabetic state and overall health.

Steroids is also one of the most common causes of diabetes in kittens. Luckily, from what I've researched, there is a much higher remission rate for steroid-induced diabetic kittens (so far, all of the ones I've found ended up "diet controlled" within a short time).

I completely agree. If we can stop the glucocorticoids, many of these diabetic cats can go into remission.

That's especially true if we feed the cat a low carbohydrate diet (i.e., less than 5-10% of calories as carbs).