Diet Composition: The Key to Management of Obesity in Cats 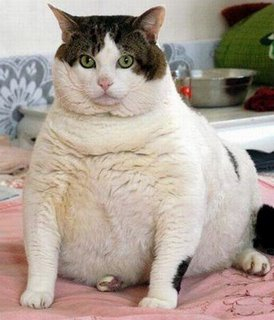 Importance of Obesity as a Disease

Obese humans generally do not live as long as their lean counterparts, and are much more likely to suffer from obesity-related diseases such as type II diabetes, coronary artery disease, osteoarthritis, hypertension, and some cancers. Cats are susceptible to the many of the same detrimental effects, including decreased longevity, orthopedic disease, diabetes, and cancer (1-3).

It has been estimated that up to a third of cats are overweight or grossly obese, with the highest rates seen in middle-aged cats (4,5). However, owners may not recognize that their cat is overweight, nor be aware of the associated health risks. 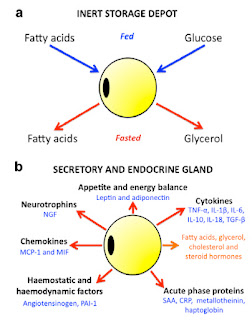 The expansion of adipose tissue was long thought to be simply a depot for the deposition of fatty acids (triglycerides) that occurred because of the excess energy intake (see Figure 1a).

However, research in the past decade has revealed that adipose tissue is not just a storage site, but also is responsible for production of many key hormones (e.g. leptin and adipokines) involved in energy balance and a variety of other processes (Figure 1b).

What does this mean for the obese cat? Obesity is a metabolic disease that results in major changes in appetite control (they are more hungry), energy expenditure (their metabolic rate is lower, thus they need to eat less), and induces a chronic, low-grade, pro-inflammatory state that may be responsible for many of the diseases associated with increased body weight (3,6-8)

Feline Obesity and Its Causes

The primary reason for development of obesity in any animal is that they are consuming more energy than they are expending. This can occur when a cat has excessive dietary intake of calories (e.g., high energy density food, excess food or treats offered) or when there is a reduction in energy expenditure (e.g., lower metabolism due to body weight or muscle mass, neuter status, or reduced activity, or illness or injury resulting in less exercise).

Recent studies indicate that greater than a third of all cats in the United States and Europe are obese, and this number likely underestimates the depth and breadth of the problem (3-5). There are a number of factors that contribute to feline obesity, including the following:
Prevention is key here. As we all know, it is much harder to take the pounds off than it is to put them on.

Obesity and the Composition of the Diet: Frequently Ignored

Another factor that is important to consider, both in the development and treatment of obesity, is the role of carbohydrates (carbs) in the diet – not because carbs themselves are directly associated with fat (although excess carbs are stored as fat), but because of the effect on protein levels in the diet (13-15).

In my next post, we'll continue this topic of obesity in cats, and discuss why low carb, higher protein diets may be the best.