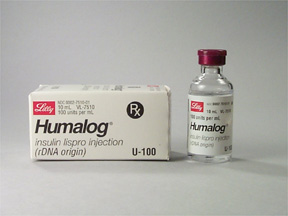 Use of Lispro Insulin for Treatment of Diabetic Ketoacidosis in Dogs

Diabetic ketoacidosis (DKA) is a life-threatening condition that develops in many dogs and cats with diabetes mellitus (1). The critical factors in the treatment of DKA include careful and frequent monitoring of the patient, skillful fluid and electrolyte adjustment, and the initiation of insulin therapy after the initial restoration of fluid volume has been achieved (2-4).

The mainstay in treatment of dogs with DKA involves administration of low doses of regular insulin, either by intramuscular or subcutaneous injection (2) or by use of a continuous intravenous infusion (3). The regular insulin used today is conventional human recombinant insulin, but this preparation is gradually being replaced by more rapid-acting insulin analogs.

One of these new rapid-acting insulin analogs is insulin lispro (Humalog, Lilly), the first commercially available insulin analog (5,6). Compared with regular human insulin, this insulin analog offers the advantages of faster subcutaneous absorption, an earlier and greater insulin peak, and a shorter duration of action.  The benefits achieved by insulin lispro are related to a sequence switch of two beta-chain amino acids. Engineered through recombinant DNA technology, the lysine and proline residues on the C-terminal end of the B-chain are reversed. This modification does not alter receptor binding, but blocks the formation of insulin dimers and hexamers. This allows for the active monomeric insulin to be absorbed almost immediately after injection.

Objectives
To characterize the use of lispro insulin in dogs with diabetes ketoacidosis (DKA) and to compare the length of time required for resolution of hyperglycemia, ketosis, and acidosis, respectively, in dogs with DKA treated with lispro or with regular insulin.

Design
Randomized prospective clinical trial performed between November 2006 and May 2009.

Animals
Client-owned dogs with naturally occurring DKA. Dogs with a blood glucose (BG) > 13.9 mmol/L (>250 mg/dl), blood pH between 7.0-7.35, and a blood beta-hydroxybutyrate concentration >2.0 mmol/L were eligible to be enrolled into the study. The dogs were randomly assigned to receive an IV continuous rate infusion (CRI) of either lispro or regular insulin.

Interventions
Lispro or regular insulin was administered as an IV CRI at an initial dose of 0.09 U/kg/h. The dose was adjusted according to a previously published protocol.

Measurements and Results
Twelve dogs were enrolled into the study. The time to biochemical resolution of DKA was defined as the time interval from when the IV CRI of insulin began until marked hyperglycemia (BG > 13.9 mmol/L; >250 mg/dl), acidosis (venous pH < 7.35), and ketosis (beta-hydroxybutyrate concentration >2.0 mmol/L) resolved.

No adverse effects were observed in association with IV lispro insulin administration.

Conclusions
Treatment of DKA in dogs with IV CRI lispro insulin is safe, and as effective as treatment with regular insulin.

What was the main purpose of this study?
The main propose of this study, at least in my opinion, was to establish that a rapid-acting insulin analog could be used to effectively treat dogs with DKA. Up to this time, only conventional human regular insulin has been reported for use in treatment of DKA in animals.  Not unexpectedly, the results of this study do indicate that treatment with lispro insulin treatment is as safe and effective as conventional human regular insulin in dogs with DKA.

Why it is important to know that rapid-acting insulin analogs will be effective in dogs with DKA?
Over the past few years, insulin manufacturers have discontinued many of the human insulin preparations (e.g., lente and ultralente) and replaced them with insulin analogs (eg, glargine, detemir).  It is very possible (even likely) that human regular insulin will be the next insulin preparation to be withdrawn, since the rapid-acting insulin analogs offer many advantages over regular insulin for use in human patients with diabetes mellitus.

This study provides us with data that shows that we can effectively transition our DKA patients over to insulin lispro insulin, should such a need ever arise.

My biggest criticism of this study
My main question is why the researchers decided to administer the insulin lispo IV as a constant rate infusion rather than give it subcutaneously (SC). In human patients with DKA, many studies have reported that hourly SC administration of lispro is as effective and safe as IV infusion of regular insulin for management of DKA (8-11).  In addition to ease of use, SC administration of insulin analogs may confer an overall cost savings, obviating the need for infusion pumps and admission to a critical care or ICU unit.

One published protocol for hourly SC insulin lispro is as follows (8,9,12):
Further studies needed
Further studies of rapid-acting insulin analogs, such as lispro, need to be done in dogs with DKA to evaluate if the the effects of hourly SC insulin lispro will also be as effective as conventional regular given IV by continuous rate infusion. If, as in man, the hourly subcutaneous protocol is just as effective as an IV infusion, this would provide a more practical, cost-effective, and technically-simplified procedure for treating dogs with DKA.