Hypertension and Proteinuria: Frequent Complications of Cushing's Disease in Dogs 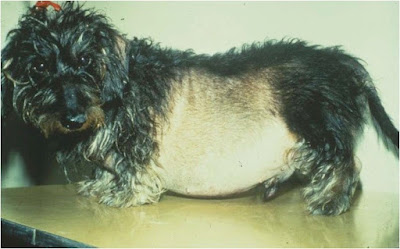 Long-Term Follow-Up of Renal Function in Dogs after Treatment for ACTH-Dependent Hyperadrenocorticism
P.M.Y. Smets, H.P. Lefebvre, B.P. Meij, S. Croubels, E. Meyer,
I. Van de Maele, and S. Daminet
Journal of Veterinary Internal Medicine 2012;26:565–573
Hyperadrenocorticism (Cushing’s syndrome) is a common endocrine disorder in dogs and is characterized by chronically elevated circulating concentrations of the steroid hormones (e.g., cortisol) produced by the adrenal cortex (1,2). The multi-systemic effects of long-term hypercortisolism in dogs results in a variety of medical complications including hypertension and proteinuria (3-7).

In this prospective study by Smets et al (9), the investigators carefully evaluated the renal function in dogs with ACTH-dependent Cushing's syndrome before and after medical or surgical treatment of hypercortisolemia. Routine serum chemistry, urine protein excretion, glomerular filtration rate, and urine markers for renal tubular function were investigated.

Hypothesis and Objectives
To assess renal function in dogs with ACTH-dependent hyperadrenocorticism (ADHAC) before and after treatment.

Dogs
A total of 19 dogs with ACTH-dependent hyperadrenocorticism (followed for at least 6 months) and 12 control dogs were studied.

Overview of the Problem:

Systemic hypertension
Results of this study confirm that systemic hypertension is common in dogs with Cushing's disease, present in 7 (37%) of the 19 dogs prior to treatment (9).  This prevalence is similar to one recent study (7), but less than that previously reported in 2 other studies, in which 53-86% of dogs with untreated Cushing's syndrome were hypertensive (3,6).

The mechanisms underlying the hypertension potentially include excessive secretion of renin, activation of the renin–angiotensin system, enhanced vascular sensitivity to catecholamines and a reduction of vasodilator prostaglandins (1,2,5). In most dogs with Cushing's syndrome, the degree of hypertension is mild to moderate and not associated with overt clinical signs of blindness (i.e., retinal detachment or hemorrhage is extremely rare). However, this moderate hypertension can exa­cerbate left ventricular hypertrophy and congestive heart failure and may lead to glomerular damage and pro­teinuria.

Glomerular Filtration Rate (GFR)
Prior to treatment, over half the dogs in this study had high values for GFR (9). The GFR decreased significantly after successful treatment.  The clinical relevance of GFR changes in dogs with Cushing's disease currently is unclear. However, the high pretreatment GFR may be the result of increased renal blood flow and decreased renal vascular resistance, as described in dogs treated with exogenous glucocorticoids (10).

In the workup and management of dogs with Cushing's syndrome, we can never forget that systemic hypertension and proteinuria are extremely common complications of this disease.

Therefore, it is prudent to continue to monitor blood pressure and urinary protein excretion in all dogs with Cushing's syndrome. If hypertension or proteinuria (or both) persist, one should institute treatment with angiotensin-converting enzyme (AEC) inhibitors (e.g., enalapril or benazepril) and add amlodipine, if needed (11-15).

And a side-note: remember that about half of dogs with Cushing's disease will have a urinary tract infection (UTI). However, because of the immunosuppressive action of excess cortisol, these dogs may not show clinical signs of UTI or have an active urine sediment (1,2). Therefore, a urine culture is recommended in all dogs with newly diagnosed Cushing's syndrome and again at 6-month intervals while on treatment with trilostane or mitotane.

A number of questions remain to be answered to better manage this renal issues in dogs with Cushing's disease:
As always, the more we learn, the more we realize how little we really know!