Q & A: How Long Can NPH Insulin be Used Once a Vial is Started?

How long can human, recombinant NPH insulin be used once the vial is opened? 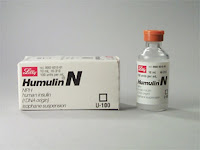 Our local pharmacist told one of my diabetic dog owners that the human NPH insulin she is using for her dog would only be effective for 30 days. After that time, the pharmacist claims the vial should be discarded and replaced with a fresh vial of insulin.

The pharmacy also told the owner that the insulin should not be refrigerated.

I'm confused. I always thought that NPH insulin should be refrigerated and is good 'till the last drop!"

The pharmacist is right and wrong in his advise — it just "depends."

Human patients are also told to replace the insulin with a new vial every 4 to 6 weeks. Why? Because the insulin my lose some of its potency after the vial has been in use for >30 days when stored at room temperature.

In both humans and animals, we can recommend general guidelines for the storage and handling of NPH insulin preparations, which include Humulin N, Novolin N, or Humulin/ReliOn NPH (1).
We ask our pet owners to refrigerate the insulin, which tends to extend the shelf life of the insulin.
Many insulins have good potency for 6 months; however, contamination from multiple sticks can be an issue, so many veterinarians recommend switching every 3 months or so.

Whenever human insulin vials are stored under refrigeration and are used beyond 30 days, the stability of these vials may be affected by a number of factors, including:
The impact of such factors is difficult to measure, so veterinarians should not be reluctant to replace an insulin vial with a fresh one if diabetes regulation due to loss of insulin potency becomes a concern.

But you are correct: in many diabetic dogs, the NPH insulin is indeed good "till the last drop" is given.

I am a pharmacist with a diabetic cat. It never made sense to me to discard perfectly good insulin (refrigerated sterile technique etc.) at 30 days. Thank you, this has become a wonderful handout and guide for me.
Pharmacists are stuck with what the government tells us we must say i.e. throw insulin out a certain number of days after opening, all meds dispensed must be destroyed a year after dispensing. However, the govt. with stockpiles of drugs, tested, and found many lasting much longer than 15 years from exp. date maintain them for use, and safety so. HOWEVER THEY WILL ALLOW PUBLIC THE RESULTS OF TESTING.
While in pharmacy school in 1979 the law was passed requiring exp. dates. Remembering pulling bottles off shelves for destruction. Years since I have seen countless prescriptions not filled because new pharmacists and especially the new clinical pharmacists believe if a medication is out of date, even if by 1 day, it's no good. Better the patient go without, since boards of pharmacy are just waiting to pounce if an outdated med (even if by one day) dispensed and they make themselves heroes in the headlines by saving the public from harm. Patients untreated sometimes in pain.