Can Increasing the Amount of Fat or Carbohydrate in a Cat's Diet Compensate for Low Protein Intake? 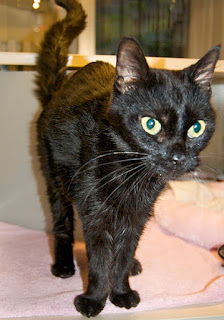 As I discussed in a recent post on Optimal Protein Requirements for Older Cats and Cats with Hyperthyroidism, energy requirements sharply and progressively increase in older cats starting at 10 to 12 years of age (1-3). If daily caloric intake is not increased, progressive weight loss will result, due in large part to the loss of lean body mass (i.e., muscle mass), a phenomenon referred to “sarcopenia” of aging (4-7).

Animals derive energy from the oxidation of the macronutrients carbohydrate, fat, and protein (12). Most animals, including rats and humans, generally adapt to the diet being fed and can oxidize whatever fuel mixture is contained in their prevailing diet (13,14). This enables most animals (especially omnivores) to use widely differing diet compositions to satisfy their energy requirements.

A number of veterinarians have contacted me over the last few weeks with concerns about the potential problems associated with feeding a high protein diet to the geriatric cat, especially in those cats with kidney disease. Basically, the questions come down to the following:
In this post, my mission is to review energy and protein metabolism in cats. I will attempt to explain why, unfortunately, increasing the amount of fat or carbohydrate fed to an older or hyperthyroid cat generally cannot compensate for a diet deficient in an optimal protein content.

Let's start with a brief review of nutritional biochemistry. If you are a practicing veterinarian like myself, it's highly likely that you may not remember all of the metabolic pathways an animal uses for energy production.

The initial biochemical reactions by which energy is derived from carbohydrates, fats, and proteins are different. However, all 3 macronutrients eventually go through a final common pathway for energy generation called the citric acid cycle — also known as the tricarboxylic acid cycle (TCA) cycle or the Krebs cycle (Figure 1) (12,15).

Carbohydrates: Glucose derived from dietary carbohydrates is first oxidized through the glycolysis pathways to yield pyruvate and then acetyl-CoA. The acetyl-CoA is then oxidized in the citric acid cycle (12,15). High-energy electrons produced in the citric acid cycle enter the electron transport chain to generate adenosine triphosphate (ATP), which transfers its energy from chemical bonds to energy-absorbing chemical reactions within the cell (Figure 1).

Fats: Fatty acids from dietary fats are initially oxidized to acetyl-CoA by the beta-oxidation pathway, which then enter the citric acid cycle and subsequently generate ATP via oxidative phosphorylation in the electron transport system (Figure 1).

Protein: Once protein synthesis is maximized, excess amino acids can be used for energy by undergoing transamination and deamination. In oxidative deamination, an amino group is removed from the amino acid and converted to ammonia.

Ammonia is toxic to the body, so enzymes convert it to urea by addition of carbon dioxide in the urea cycle, which takes place in the liver. Urea can safely diffuse into the blood and then be excreted into the urine (Figure 2).

In contrast, amino acids are not "stored" in the body, other than that found in muscle and other structural proteins. Although amino acids can be converted to either fat or glucose, the opposite does not occur — fat and carbohydrates cannot be directly converted to amino acids to be made into protein (12-15).

Proteins, from the Greek proteios meaning "first" (16), are important biological molecules that consist of string of amino acids linked together in sequence as polypeptide chains. Proteins vary in shape and size, some consisting of only 20-30 amino acids and others of several thousands (12,15).

Proteins are present in every living cell. In the skin, hair, cartilage, muscles, tendons, and ligaments, proteins hold together, protect, and provide structure to the body. As enzymes, hormones, antibodies, and globulins, they catalyze and regulate body chemistry. In addition, protein is required for growth and tissue repair, as well as for maintaining muscle mass and tone.

Hypermetabolic states, such as hyperthyroidism or other illness, increase both protein turnover and nitrogen losses and therefore increase the daily protein requirements (18,19).

Protein as an Energy Source
Unlike fat or carbohydrate, protein cannot be stored as such in the body (other than as muscle protein itself).  In animals fed diets containing more protein than is needed, the extra protein is metabolized and used for energy (Figures 1 & 2).

In all species, but most importantly in cats (see below), ingested amino acids are converted to carbohydrates via gluconeogenesis (12,15,17, 20-22). This pathway is also used under starvation conditions to generate glucose and energy from the body's own proteins, particularly those found in muscle.

The cat, as a strict carnivore, has evolved to to depend on protein as a major energy source. The "natural" diet of cats in the wild is based upon the consumption of small mammals, birds, and insects — the composition of this diet is high in protein and fat but low in carbohydrate (20-22). This natural diet high in animal protein contains all of a cat's essential amino acids, which is not the case for plant-based proteins.

Cats have no dietary requirement or need for carbohydrate but are adapted physiologically and metabolically for high protein intake (23). In support of that, normal cats do well when fed diets containing 70% protein (24-27). The lack of a need for dietary carbohydrates is related to the fact that cats have developed a tremendous ability to synthesize their needed glucose from protein catabolism via hepatic gluconeogenesis (24,25,28).

When most omnivores (e.g., humans, rats, pigs, dogs), ingest a diet high in protein, the activities of the amino acid-catabolizing enzymes in the liver increase to cope with the higher flux of amino acids (31-33). The activity of the urea cycle enzymes also increase to metabolize the increased ammonia generated upon the catabolism of the amino acids. On the other hand, when fed a diet low in protein, omnivores accommodate by lowering the hepatic activity of these catabolic enzymes of amino acid metabolism, as well as decreasing hepatic urea production (31-33).

By contrast, cats have a very limited ability to down-regulate these hepatic catabolic enzymes when fed a low-protein diet. In a classic study, Rogers et al (29) compared the activity of several catabolic enzymes of amino acid metabolism in adult cats fed either a high- or low-protein diet or fasted for 5 days. Results showed little changes in the hepatic enzyme activities between the 3 groups of cats, with hepatic enzyme activities remaining set at high levels to cope with a high protein diet (even when they weren’t being fed!).

Why would cats be so different?
Well, compared to other carnivores, cats may not be so strange after all. A similar degree of metabolic "inflexibility" has also been reported in other carnivores such as barn owls and the rainbow trout (34,35).

This limited metabolic flexibility in cats and other obligate carnivores likely represents an evolutionary adaptation to a consistently abundant supply of dietary protein. The moderately high and fixed activity of the urea cycle provides a safeguard against ammonia toxicity after ingestion of a high-protein meal. In addition, the high rate of amino acid catabolism allows for a readily available source of energy via direct oxidation or as a substrate for hepatic gluconeogenesis.

It is only when a cat is fed a lower protein diet, a condition that would never happen in the wild, that the high rate of protein catabolism becomes a disadvantage.