Does Iodine Deficiency Cause Thyroid Disease in Cats?

Although only first described in cats in the last 1970s (1), today hyperthyroidism is clearly the most common endocrine disorder of cats, being detected at rates as high as 2% of all cats examined (2). Cats certainly live longer today than they did 35 years ago when we first described the disease, but it is highly unlikely that this epidemic of hyperthyroidism is solely the result of the aging cat population.

Other factors must be involved: the most likely candidates include deficiencies or excesses in the cat's diet or the chronic exposure to one or more "thyroid-disrupting" chemicals present in the environment, drinking water, or diet (2).

Is Diet the Cause of Feline Hyperthyroidism?

All epidemiologic studies of cats with hyperthyroidism reported to date have identified commercial cat food diets as a risk factor for developing the disease (3-10). One of these studies suggested that particular flavors of canned food (fish, liver, and giblets) may be involved (5), and another incriminated cans with plastic linings in easy-open (pop-top) lids (8), which may contain the thyroid disruptor chemical bisphenol-A (BPA).

Soy isoflavones, a well-known goitrogen that inhibits thyroid hormone synthesis (11,12), are also known to be present in many dry cat foods (13). Finally, most recently, iodine deficiency has "resurfaced" as a candidate for development of goiter and subsequent hyperthyroidism in cats (6,14).

Because of the clear association between diet and hyperthyroidism, several studies have attempted to implicate iodine in the cause or progression of the disease. The iodine content of cat food has always been extremely variable. However, a definite trend for adding lower amounts of iodine to cat food has occurred over the last 30 years as the recommended dietary iodine requirements for cats has changed (14).

The role that iodine plays in the development of hyperthyroidism remains unclear, but it can be postulated that wide swings in iodine intake over time may contribute to the development of thyroid disease in cats (19-21). It also possible that some cats will be consistently fed a low iodine diet, which would also predispose a cat to thyroid hyperplasia and goiter (22,23).

Could Iodine Deficiency Now Be Contributing to the Disease?

Iodine deficiency is a known cause of thyroid hyperplasia and goiter in man and all animals, including cats (22-25). Iodine is a key element needed in the synthesis of thyroid hormones. As a consequence, inadequate iodine intake leads to low circulating thyroid hormone concentrations, which spurs the pituitary gland to increase its secretion of TSH (Figure 1). Persistently high circulating TSH concentrations will lead to thyroid hyperplasia and possibly goiter (22,23).  It's possible that with enough time and continued stimulation, the hyperplastic thyrocytes may become autonomous, leading to adenomatous hyperplasia and then to thyroid adenoma. As these tumors continue to grow and function independent of TSH control, hyperthyroidism would ensue leading to suppression of pituitary TSH secretion. In some cats, transformation of adenomatous hyperplasia/adenoma to thyroid carcinoma will occur (26).

So, based on the trend to lower iodine levels in cat food over the last two decades, could iodine deficiency be contributing to the explosion in hyperthyroid cases that we are seeing today? In support of that reasoning, a recent case-control study reported that cats consuming commercial foods which were relatively deficient in iodine were more than 4 times as likely to develop hyperthyroidism compared with cats that ate iodine-supplemented foods (6,14).

Does Iodine Deficiency Act Synergically with Other Goitrogens or Thyroid Disruptors?

It is difficult to envision how iodine deficiency, excess, or wide fluctuations in iodine intake would be solely responsible for the thyroid adenomatous changes and the development of hyperthyroidism in cats. However, we must remember that most, if not all, hyperthyroid cats are also exposed to other goitrogens or thyroid disruptors in the water, diet, or the environment (e.g., BPA and PBDE) throughout their lifetime (2,8,28). Thus, iodine deficiency may act together with these other goitrogens in a synergistic or cooperative manner to effect multiple sites of thyroid hormone metabolism or action; over time, this may lead to the adenomatous thyroid changes characteristic of hyperthyroidism.

In support of this reasoning, studies in rats demonstrate that soy isoflavones are not highly goitrogenic when added to the diet alone, but soy will consistently induce thyroid hyperplastic and adenomatous changes in the presence of iodine deficiency (29,30). In other words, soy can cause goiter, but only in animals or humans consuming diets that are only marginally adequate in iodine, or in those who are otherwise predisposed to developing goiter because of other factors. 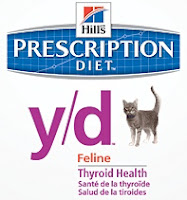 But, will lowering T4 and T3 secretion in these hyperthyroid cats lead to increases in circulating TSH and continued stimulation of thyroid growth and proliferation in some cats? Will this TSH stimulation cause transformation of benign adenomatous thyroid tissue to carcinoma, as has been documented to occur in some hyperthyroid cats (26)?

The short answer is this: we simply do not know.  The long-term safety studies needed to answer this question have not yet been done. Because Hill's y/d is not a drug (although it's certainly being marketed as a replacement for methimazole), the company is not required to do the these safety studies, and it's fairly clear that they have no intension of paying to have them done.

Nevertheless, it would definitively be prudent NOT to feed y/d to clinically normal cats, since even mild decreases in thyroid hormone secretion could stimulate TSH secretion (22,23). Again, this could lead to thyroid hyperplasia, goiter, and would definitely predispose the cat to developing hyperthyroidism in the future (Figure 1).