Diagnosis of Diabetes Insipidus: Is the Water Deprivation Test Necessary?

Several different diagnostic approaches can be used to confirm and distinguish central diabetes insipidus, nephrogenic diabetes insipidus and primary (psychogenic) polydipsia. The water deprivation test is generally considered by most authorities to be the best diagnostic test to differentiate between these disorders. However, the water deprivation test has many disadvantages, which include the following:

A simpler and more practical method of diagnosis that I recommended as an alternative to water deprivation testing is evaluation of the clinical response to a closely monitored therapeutic trial with the vasopressin analogue, desmopressin (DDAVP).

Use of the therapeutic trial with desmopressin as a diagnostic test

This approach is less complicated and time consuming than the water deprivation test, and is certainly easier on the cat. The cost of the two approaches varies according to circumstances but is often comparable. Again, before a desmopressin trial is initiated, it is extremely important to rule out all other common causes of polyuria and polydipsia, limiting the differential diagnosis to central diabetes insipidus, primary nephrogenic diabetes insipidus, and primary (psychogenic) polydipsia. For further information, see my previous blog posts. 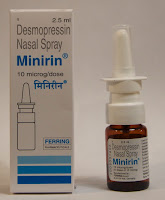 To perform the test, the owner should first measure the animal's 24-hour water intake for 2 to 3 days before desmopressin is initiated, allowing free-choice water intake. The dog or cat is then treated with therapeutic dosages of desmopressin (see our next post, What Drugs Do We Use to Treat Diabetes Insipidus).

For the purposes of this test, the desmopressin ideally is administered subcutaneously at the dosage of 1.0 to 4.0 μg twice daily for a period of 5 to 7 days. If subcutaneous injections cannot be given, administration of desmopressin by the conjunctival (1-5 drops twice daily) or oral routes (0.05-2.0 mg twice daily) can be used instead. During this treatment period, the owner should continue to measure the animal’s daily water intake and monitor the degree of urine output. 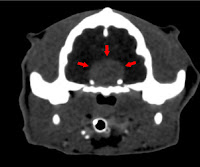 In any older dog or cat that develops diabetes insipidus, one should consider pituitary imaging with computerized tomography or magnetic resonance imaging to exclude a pituitary mass. This is especially true if the affected animal has associated neurological signs.


Computerized tomography (CT) image of the brain of a cat with diabetes insipidus. Note the very large pituitary tumor invading the hypothalamus.

Thanks for this post. It was very helpful. You mentioned associated neurological signs regarding baring imaging. What might those be?

Our cat is drinking 3 cups of water a day and we are very reluctant to have the water deprivation test done. Is the trial test dangerous? She's had normal x-rays, blood work, and urinalysis except for a low sp gravity 1.006. And she has chronic pancreatitus. Our vet said cats don't get psychogenic polydipsia. Is this true? Thank you so much.

Cats with diabetes insipidus can rarely develop large, invasive pituitary tumors, leading to destruction of the vasopressin-secreting neurons in the hypothalamus and pituitary. Those signs would vary from circling, to seizures or just becoming increasing lethargic or responsive.

Psychogenic polydipsia does occur in cats, generally secondary to hyperthyroidism. Other than that it is very rare, as is diabetes insipidus.

I know I am late to the conversation, but I'm not seeing how you would differentiate between psychogenic polydipsia versus nephrogenic diabetes insipidus.

I have a big goofy hound dog that has recently started drinking and peeing excessively. Blood tests are inconclusive of anything.

Your article implies that a CT or MRI would be indicated in an older animal.

And I interpret that the modified water deprivation might be a better route for my 5 year old hound. Except that you don't give the circumstances that would distinguish psychogenic from nephrogenic.

Dogs with psychogenic polydipsia have normal pituitary and kidney function and can concentrate their urine when deprived of water.

Dogs with nephrogenic diabetes insipidus can not do so. Most of these dogs have evidence of some kidney damage on blood testing or imaging.

That makes sense, even to me!